Honestly, is Herald management even aware that their guy covering Carmel doesn't know the territory? It has become painfully obvious that reporter Tom Leyde has never spent any significant time learning about the town, beyond what he's spoon-fed at city council meetings. I have documented numerous careless errors on his part, most recently in my November 7th Mental Note.

Today, in an article about the town's experiment with parking meters Leyde magically relocated the north Sunset Center parking lot from the corner of Mission and 8th to "Junipero Street between Third and Fifth avenues." That is more or less the location of the Vista Lobos parking lot (on 3rd between Junipero and Torres) which he didn't place anywhere. 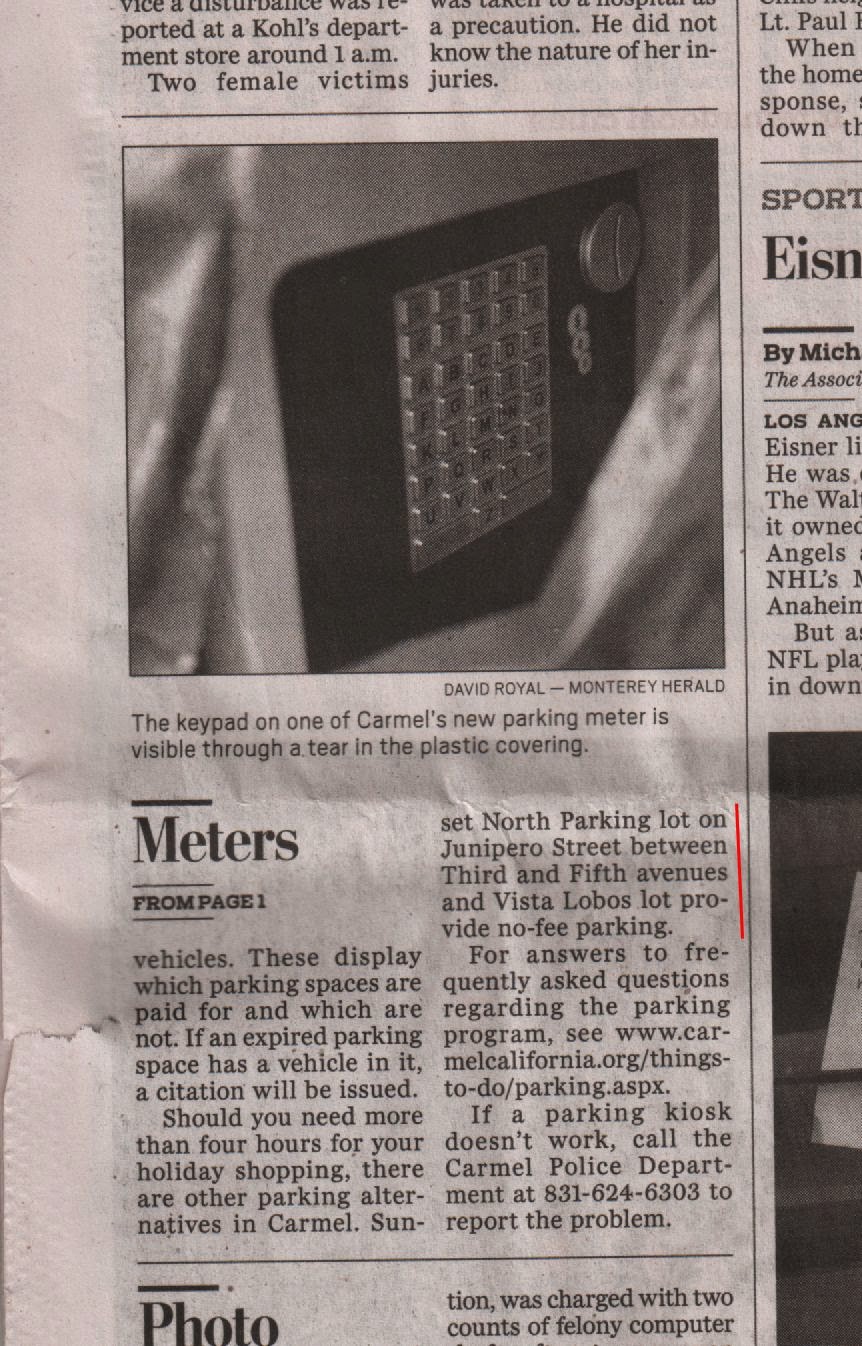 At least he finally figured out that Carmel's numbered streets are "avenues" and not "streets."

Elsewhere in today's Herald the weekly "Bits 'N' Bytes" column was published in three different fonts. I've labeled the image below with numbers 1,2, & 3 indicating where each font starts. Number 1 is the standard Herald font. Number 2 is a tiny version of the same font, while 3 is a similar but slightly fatter font with greater spacing between letters. Who does this stuff?

Herald Boo-Boos are piling up on my desk. Time to clean it off.

I am unable to reproduce an image of boo-boo #32 because it was just a teensy bit too large to fit on my scanner. So you'll have to be content with a written description.

There was an editorial on Sunday November 16th entitled China climate change pact changes debate. It was under the heading "The Herald's View" which I found peculiar because I wouldn't expect our puny, semi-local Herald editorial board to tackle such a significant international topic. And I was right, for at the end it was signed "Bay Area News Group" indicating that it originated with a San Francisco Bay Area newspaper, and not the Herald. Typically editorials written elsewhere are listed under the heading "Other Views" so their origins are clear.

Number 33 was on page B-1 of that same day. It had an interesting story about the grave of a dog located at Carmel's Forest Theater. It included a photo of a painting of the dog, but just to be clear, the article was about the dog and the grave, not the painting. So why was the article continued on page 2 under the heading "Art"? "Dog" would have made perfect sense, as would have "grave" or "Pal" (the dog's name). No doubt some underpaid paste-up guy saw the photo and concluded the story was about the painting.

This article also gave us a bonus boo-boo. The picture caption called it "An portrait of Pal."

Moving along to November 23rd, the "Your Town" news briefs had an item with an improperly formatted headline that looked like normal text. 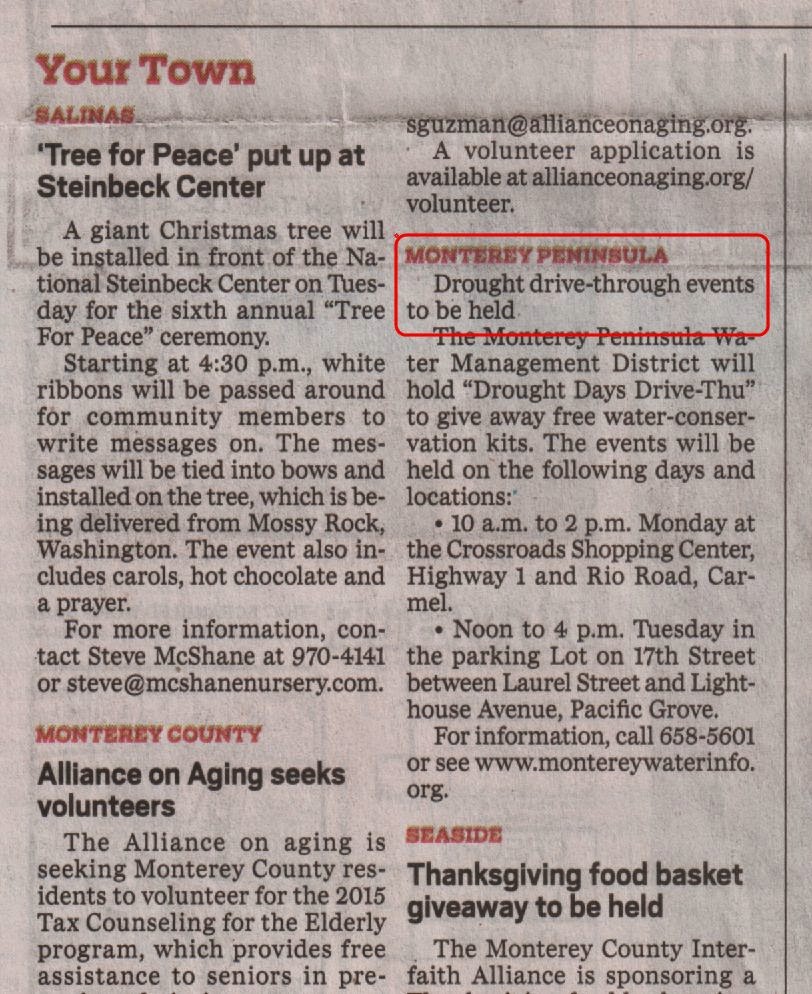 __________
Finally, we have a November 24th story about that San Francisco window washer who survived an 11-story fall. The headline said "Physicist: Car broke man's 11-story fall." The article had only three paragraphs. The first one briefly described the fall. The second described the man's current condition. The third said KCBS radio asked a physicist how the poor man was able to survive. The end. The explanation was apparently cut out for lack of space. How stupid can Harold get? 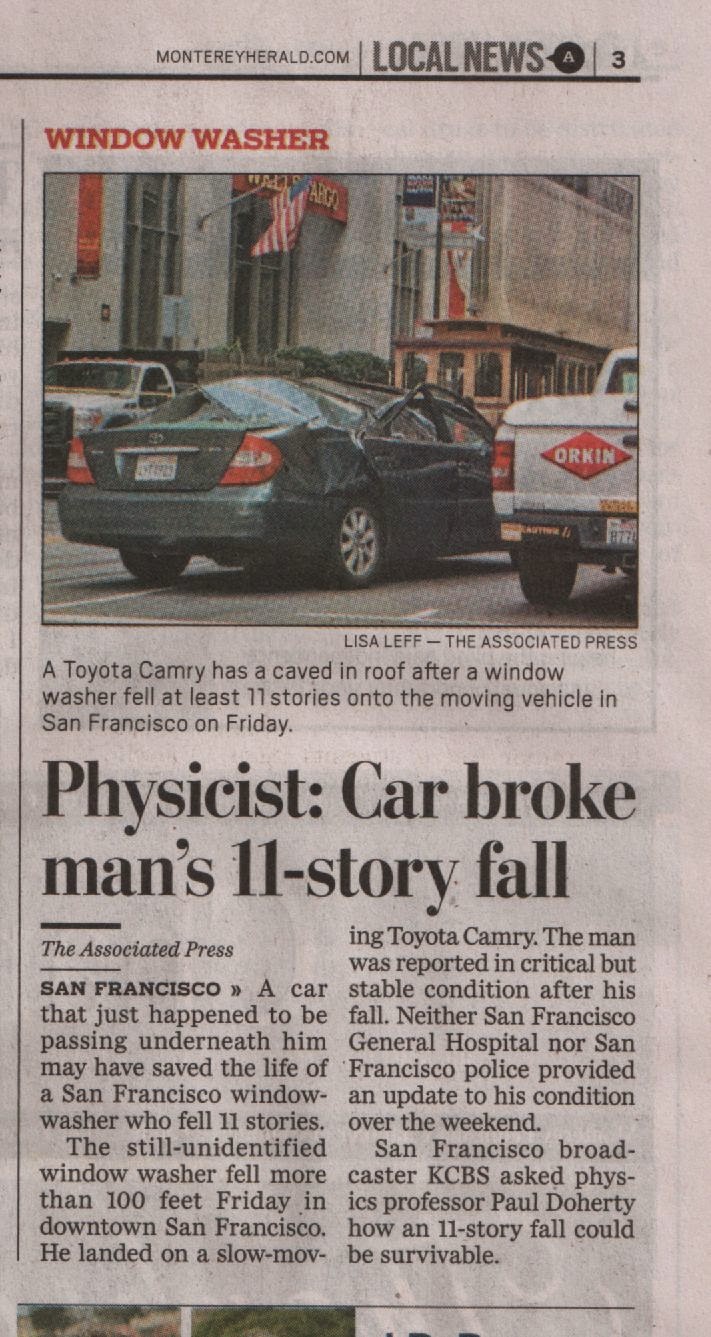 (Sing to the tune of the Big Bang Theory theme song.)

Our e-conomy was in a stable state,
Then nearly thirteen years or so ago Bush tax cuts started,

The deficits ballooned,
Bernard Madoff began to croon,
Bad housing loans had really zoomed,
We started wars,
FINANCED BY CHINESE LOANS!
Math, science, common sense,
Were treated as impediments,
Which led to the fall of big banks,
BANKS!
Posted at 11:50 PM No comments:

Just when I thought the Herald was starting to clean up its act and put the Boo-Boo Watch out of business two more careless errors dropped onto our front porch Tuesday morn.

Boo-Boo #30 came in the form of a strange headline indicating that a new Senate chairman was planning a border. That's funny. I thought our country already had borders. Based on the content of the article, the headline would have made perfect sense if the word "bill" was tacked on the end, but it wasn't so it didn't. 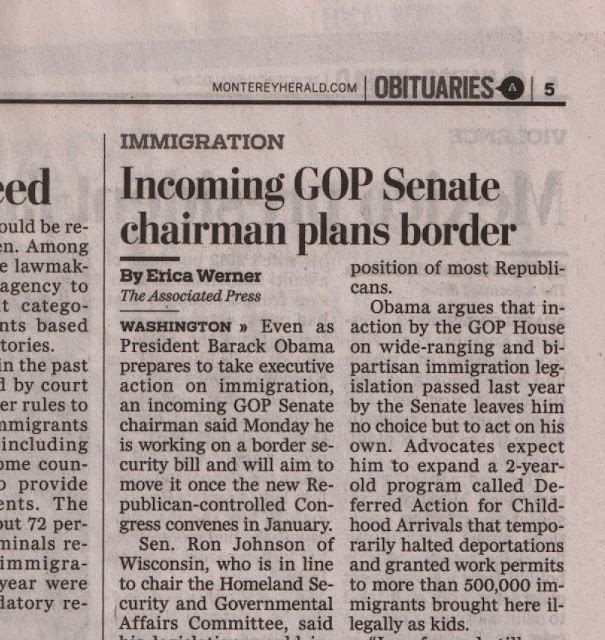 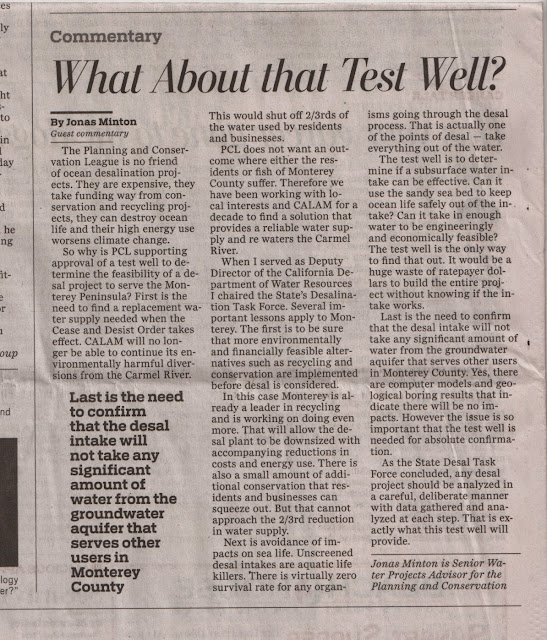 I guess the new space-saving policy at the Herald is just to lop off words when you run out of room. The remaining words still mean the same thing, right?
Posted at 11:43 PM No comments:

The good news today is that Herald boo-boos seem to be coming less frequently, but this week we had two.

A couple of months ago a new reporter named Tom Leyde started covering Carmel news. In reading his stories I get the impression that the man has never spent much time in Carmel, and he doesn't seem to know his way around. Worse, he has written reports containing significant factual errors. I discussed two of these in detail in part 13 and part 14 of the Herald Boo-Boo Watch.

Since then I was beginning to think that maybe he was starting to get the lay of the land. His reports on the happenings at city hall were in accord with reports from other sources. However, Leyde's reports were limited to city council activities. They did not require a broader knowledge of the town layout and features, and unfortunately his ignorance of the territory became glaringly evident again this week.

In Tuesday's paper dated November 4th Leyde wrote about the council's decision to move the weekly farmer's market out of Devendorf Park onto "Sixth Street, between Mission and Junipero Streets" Here's how it appeared.

The first error in this article is the street name. Carmel's numbered streets are avenues, so it should read Sixth Avenue, not Sixth Street. If this was the first time he made this mistake I would overlook it, but he made the same mistake a few days earlier. It's a sign that he doesn't know the territory he's covering.

Then in the 5th paragraph he wrote "...with the move to Sixth Street, the market will be further from the core of Carmel's Ocean Avenue Merchants." Here he is giving readers the impression that the farmer's market is moving some distance away from Devendorf Park. But actually, the segment of Sixth avenue in question marks the northern boundary of the small park, so at best the whole shebang is moving maybe 50-75 feet, not a significant distance by any means. In fact it will still be visible from Ocean Avenue.

Further along, Leyde lists several conditions the city council imposed on the farmer's market. Leyde described one this way: "Fifteen percent of the booths at the market should be available at no cost to local groups, such as The Carmel Bach Festival and California Repertory Theater."*

Once upon a time there was a short-lived California Repertory Theater in Pacific Grove, but it went out of business almost 30 years ago. Currently, there's a California Repertory Company in Long Beach, but they're hardly local. The one in Carmel is called Pacific Repertory Theatre, or Pac-Rep for short. It's a well-known place. Everybody on The Peninsula has heard of it. Well, almost everybody.

Individually, these are pretty minor mistakes, but collectively they show that the reporter doesn't know his territory. That makes it hard to take anything he writes seriously.

* NB: The sentence cited above was printed on two separate pages. the beginning was on page 2 and continued on page 4, so I wasn't able to easily reproduce an image of it here.
______________

Now for boo-boo #29, which was on page 3 of the November 6th Herald. The paper misspelled the name of actor Benedict Cumberbatch as "Cumberpatch." 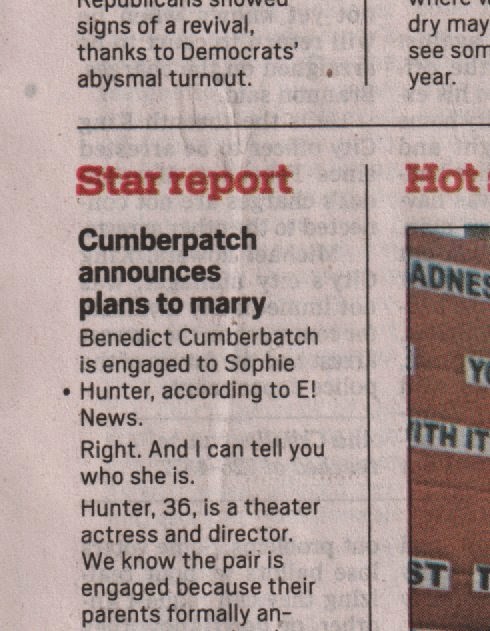