I had hoped we'd get through the holidays without any more boo-boos, but the Herald gave us one for Christmas. The paper printed the same article twice, once on page 1 and again on page 3. The headlines were different, and the one which began on page 1 and finished on page 5 had three more paragraphs than the one on page 3, but the main text was otherwise identical.

How to get people to watch a bad movie.

I spent almost a dozen years in the movie theater business. About half of them were in Carmel, but I got my start working in two large downtown theaters in Salem, Oregon. I started out in 1978 selling popcorn, and a year later advanced to assistant manager, and later, manager. My boss was a great fellow named Jerry Proctor. His friends called him Jerry, but everyone who worked for him knew him as Mr. Proctor. He was very businesslike, but easy to get a long with, and he loved to tell stories.

One of his favorite stories involved a very bad movie. When he had managed a drive-in theater in Eugene a new coming attraction trailer hit the screen. He couldn't remember the title, but he said it was so offensive he had the projectionist remove it from the film immediately. Too late. A woman in the audience came in and told him in no uncertain terms that she would do everything in her power to keep that movie from ever being shown in Eugene.

She made good on her threat. She launched a letter-writing campaign, petitioned the city council, and got the attention of the local newspaper. She wasn't successful in keeping the movie out of town, but the whole town knew about it. On opening night the curious crowds were so huge the police had to come out to control traffic.

The theater made a fortune that weekend. Everywhere else in the country the movie bombed. On Monday morning the distributor, seeing these amazing numbers from Eugene, called Mr. Proctor and asked “What did you do?!?” I think the story even made into the trade magazine Box Office.

This story seems relevant to this week's news that Sony Pictures has shelved The Interview, a comedy about a fictional plot to assassinate the leader of North Korea. Reportedly North Korea is responsible for recent hacker attacks on Sony's computer systems, and is threatening further mayhem if Sony releases the movie.

Now, I've seen the ads for The Interview. It doesn't look like an awful movie, but based on my experience, it looks like one that would come and go fairly quickly and not get much attention. But now, thanks to North Korea or some sympathizer, a whole lot of people across the country and around the world have heard of it and are curious enough to want to see it. Good job!

Monday's Herald had just one small boo-boo. The opening paragraph of a front page article was printed in two different fonts. 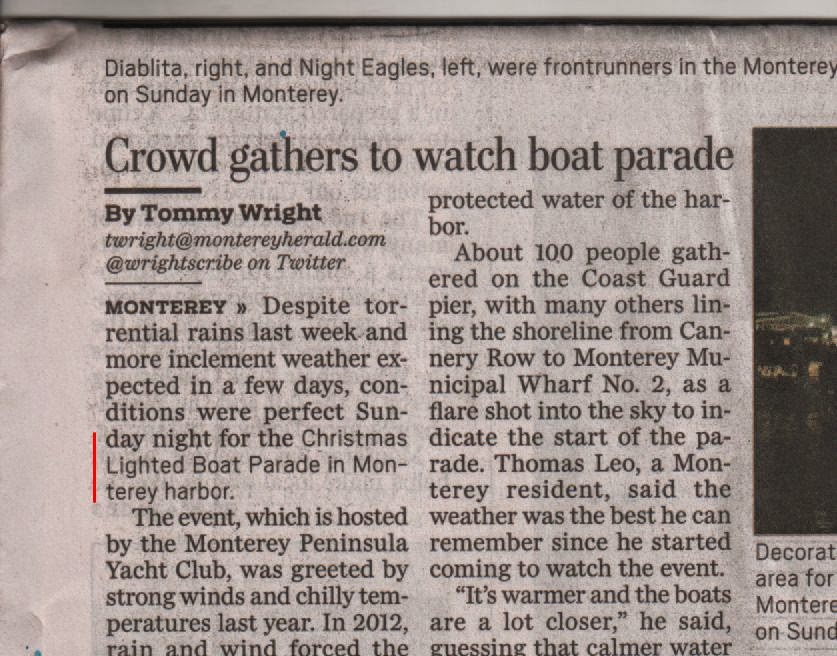 This week, Carmel-By-The-Sea is starting a six-month experiment with paid parking. Ten "kiosks," which are essentially fancy parking meters designed to serve an entire block, have been installed along Ocean Avenue to test the viability of implementing paid parking throughout the business district.

Carmel has flirted with this idea several times in the recent years, but this is the first time they've hopped into bed with it.

The theory justifying paid parking, as I understand it, goes something like this. There are not enough parking spaces downtown to meet demand. Making matters worse, it is believed that downtown employees are parking in on-street spaces, even though they're limited to two hours, taking parking away from customers. It is alleged that employees keep moving their cars to avoid getting tickets. Charging for parking, it is said, will discourage employees from parking on downtown streets and encourage them to park in the free parking spots and lots on the periphery of the business district. This in turn will make it easier for customers to find parking, thus boosting business. Ya got all that?

Supposedly this six-month experiment will test the validity of the theory and provide data to help the city council decide whether or not to install meters all over downtown. I don't get how putting meters on only one street will accomplish that because anyone with any sense will just park on the other ten downtown streets where parking will still be free.

I don't even get the theory. I find it very hard to believe that restaurant and shop owners would let their employees abandon their posts for ten minutes at a time, three to four times a day every day, just to move their cars every couple of hours. Maybe a few tolerate it, but only a few. And where would they move their cars to? According to the theory, street parking is hard to find, so they could spend a lot of time looking instead of working. That does not compute.

Furthermore, business owners must be keenly aware that if employees are taking up spaces that customers need, then they'll lose business. Now tell me, how many shopkeepers will let their employees park on the street letting them drop everything to move their cars, when they know it's bad for business? Maybe there are a few. Maybe. That would account for the origins of the theory, but I hardly think they're the rule.

But for the sake of argument, let's assume employers and employees are parking on city streets within the business district. Will paid parking be good for business as it's proponents claim? They say paid parking will free up spaces, making it easier for customers to find parking, and thus bring more customers into town.

I agree it will free up parking spaces, but not for the reasons they think. It will free up spaces because many local people will stop shopping and dining in Carmel altogether and most of the rest will visit Carmel less often. There will be very few who won't change their shopping habits at all. Most people won't hassle with meters unless they absolutely have to, especially when they can park free at the mouth of Carmel Valley, Del Monte Center, and almost every other shopping area on the Monterey Peninsula.

To illustrate my point look at Cannery Row and Fisherman's Wharf, the only other areas of the Peninsula that charge for parking. Locals rarely go there. The vast majority of customers there are from out of town, so only touristy shops and restaurants can make it. Is that what Carmel wants? Paid parking has the potential to completely transform the town's economy, and not in a good way. It is therefore a path fraught with peril.
Posted at 6:44 PM No comments: