Why Hillary voted for the Iraq war

Let's get something straight. When people (mostly Bernie Sanders supporters) complain that Hillary Clinton "voted for the war in Iraq" they're missing the larger context.

The vote was to "authorize the use of force" against Saddam Hussein if he didn't open up Iraq to UN weapons inspectors and comply with American demands that he destroy any weapons of mass destruction he was believed to possess. The Bush Administration sold it to Congress as a way to use the threat of force to get Saddam to comply. And it worked! The mere threat of force did indeed compel Saddam to readmit the UN weapon inspectors who found absolutely nothing.

It should have stopped there. But Bush didn't accept the inspectors' findings and started the war anyway. I don't know how Hillary reacted, but many members of Congress who voted for the authorization for its threat value felt betrayed by Bush.

Remember, in early 2003 Bush did not yet have the reputation of being a lying weasel, so Congress took Bush at his word that he would use force "only as a last resort."

A lot of good people in Congress were deceived by Bush, not just Hillary. A lot of good Democrats among the public at large were also deceived. Hillary is not responsible for the mess that followed. The blame rests entirely on George W. Bush. Period.
Posted at 10:55 PM No comments:

As someone who advocated repairing the wooden cross that was vandalized on Del Monte Beach in 2009, I have mixed feelings about the metal cross that suddenly appeared in its place on Easter weekend. For starters, a metal cross is historically inaccurate. And my sense of law and order dictates that one should not place things on public property without permission. On the other hand, that same sense is still outraged that vandals got away with a crime thanks to the American Civil Liberties Union. 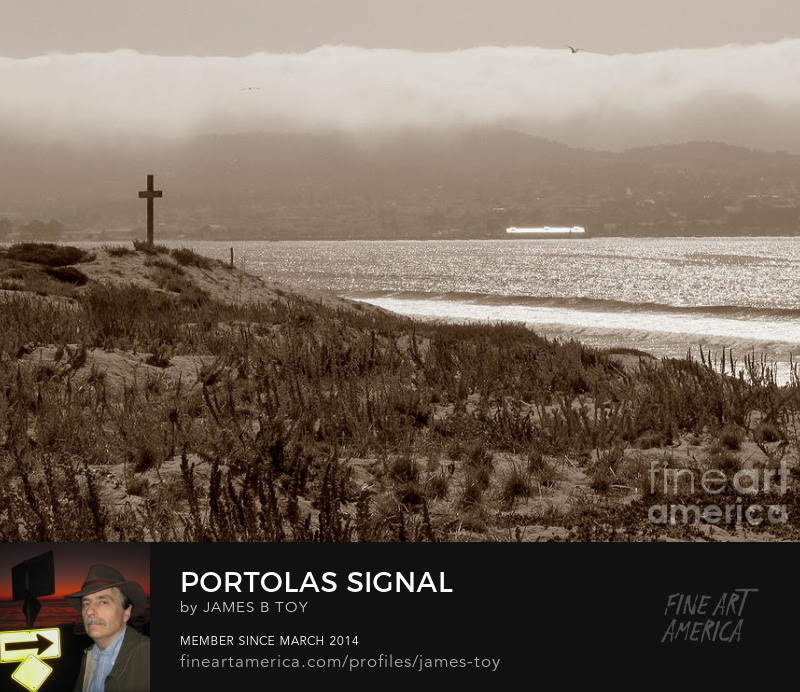 So I am grateful that the issue is back on the public radar. A little civil disobedience on the part of those who made this metal cross may be a good thing. Since nothing was destroyed, and something new was created, one might call it a constructive form of vandalism.

News reports said that passersby were delighted to see a cross back on the concrete pedestal, indicating that this controversy was never really settled in the public consciousness. For that reason I think it is time for the Monterey city council revisit this issue.

When the original cross was toppled, council members wanted to repair it as quickly as possible. But the ACLU threatened the city with a lawsuit on the grounds that a cross on public property violated the principle of separating church and state. This occurred during the economic crisis when the city was struggling to pay routine expenses, so a costly court fight was out of the question.

The council agreed to repair the cross only if a legal defense fund of $50,000 could be raised through private donations. Unfortunately, the city made no real effort to solicit donations. There was no way to contribute online, and no use of social media to spread the word. Only checks were accepted by mail, and the address was publicized by the local news media for just a few days. Still, they managed to raise 10% of the goal with this feeble effort before donations petered out. After a couple of months the city gave up, moved the cross to San Carlos Cemetery, and returned the donations. As a result the ACLU's interpretation of the law became public policy by default.

They will deny this of course, but any way you slice it the ACLU took advantage of a crime and the city's weakened financial condition to force Monterey to do things their way. So despite the common belief that this matter was settled, the legal and moral questions surrounding this issue actually remain officially unresolved, still simmering in many people's minds. Hence the mysterious appearance of a homemade cross on the beach and the joyful welcome it received on Easter weekend.

In the absence of a fair and impartial judicial review, we do not know if the old wooden cross was legal or not. True, it had obvious religious connotations, but this particular cross primarily had a secular purpose in replicating a historic artifact that was directly involved in the founding of Monterey. In 1769 the Portola-Crespi expedition itself used the cross for the worldly purpose of signaling their supply ship. Is the law really not flexible enough to accommodate public historical monuments that happen to have religious significance as well as secular historic importance?

Monterey needs to resolve this question once and for all. As I see it we have three options.

1. Do nothing and continue to let the vandals know their crime was successful.

2. Put the wooden cross back up on the beach and not be intimidated if the ACLU challenges it. If a legal defense fund is still needed, make use of social media, crowd funding, and every other available resource to maximize donations. And be patient! It takes time to raise $50,000.

3. Find a way to compromise.

Option number 1 should be unacceptable to anyone who respects due process of law. Option number 2 would settle the issue definitively. But if challenged it would be time consuming and expensive with no guarantee of a favorable outcome.

As far as option number 3 goes, two things have recently come to my attention which may lead to an amicable solution. The first came from a cross opponent (and boy was he cross!) who said we needed more monuments to the local natives. I agreed with him on that point. The second was a letter published in the April 1st Monterey Herald from ACLU attorney Michelle Welsh, the same one who stared down the Monterey city council in 2009.

In her letter she wrote:

The word that stuck out to me was “solitary,” and I seemed to recall that in 2009 she said that a cross might be acceptable if it was part of a larger display.

With those two points in mind, I suggest putting the cross back up and adding life-size statues of local natives decorating the cross as described in Father Juan Crespi's journal. In 1770 Crespi and Portola returned to Monterey and found the cross had been encircled with arrows stuck in the ground, mussel shells were piled at the base, and a string of sardines was hanging from one arm. Recreating that scene would represent the “first contact” moment between cultures and make it clear to observers that the purpose of the monument is to honor a historic event, not to promote religion.

But if the ACLU shows no willingness to compromise the city should proceed with option number 2. We must have a formal resolution of this issue because we cannot allow vandals and bullying lawyers to unilaterally dictate public policy, as they did so brazenly in 2009.
Posted at 5:00 PM 1 comment: