A Comprehensive and Slightly Irreverent Guide To Local Water Politics

About three years ago I posted a “Pocket Guide to Local Water Politics” to help poor confused people like me sort out the crazy quilt of interlaced complexities of competing interests. A lot has changed since then, so I thought an updated guide would be in order. Unfortunately, things have become so insanely complex that I must increase the guide to briefcase size.

Background:
In the mid 1970s California experienced a severe drought. Here on the Monterey Peninsula residential water users were rationed to 50 gallons per person per day, a huge inconvenience in the days of 3 gallon per flush toilets and 5 gallon per minute shower heads. In 1978 the State Legislature created the Monterey Peninsula Water Management District, commonly known as the “Water Board,” to find and construct a new water supply so we would never have to go through that again. Nearly forty years and three droughts later almost nothing has been done. Despite the cries of “not me” echoing throughout the region, pretty much everyone is to blame.

Here are the players. Their specific names have been removed to protect me from the guilty:

1. Monterey Peninsula Voters who, in the mid 1990s, voted down two perfectly good water supply projects that would have solved our problems long ago.

2. A State Water Board which determined that the local Private Water Company was legally entitled to only one third of the water it was pumping out of the ground in Carmel Valley, the Peninsula's primary source of water for over 100 years. The board issued a cease and desist order (CDO) to take effect at the end of 2016.

3. The County which arbitrarily passed an ordinance saying that any desalination plants built in Monterey County must be publicly owned.

4. The Local Water Board which devised and presented two water supply projects to Peninsula Voters for their approval.

5. The Private Water Company which has been the Monterey Peninsula's water provider for as long as water has been needed here.

6. The Neighboring Water District came into the picture a few years ago with a proposal to save the Private Water Company from the ineffective Water Board. It was called the Regional Desalination Project (RDP).

7. After the RDP collapsed it became evident that none of the relevant public agencies were competent enough to find a new water supply. So the six Mayors of the six Monterey Peninsula cities got together and formed a plan: Create a new public agency! They call it the Water Authority, and the Mayors put themselves in charge.

8. A Prominent Local Businessman who, for several years now, has claimed to have the perfect desal plant idea called The People's Project.

9. Deep Water Desal is the “Plan B” of the Water Authority.

10. A handful of Citizen Groups are also in the mix. Their favorite activity is writing mind-numbing guest commentaries in the Local Newspaper, almost every week for the past few years.

11. Finally, there is a Business Association, which is solidly backing whatever water project looks most promising at any given point in time.

So there it is, the whole situation in a nutshell. No, that's wrong. It's a freakin' nuthouse! Don't feel bad if you don't understand it. It is all quite incomprehensible to any sane person. If, by chance, you think you do understand it you are advised to seek psychiatric help as soon as possible.
Posted at 12:10 AM No comments:

I thought I was going to quit doing the Monterey Herald Boo-Boo Watch. The paper's gaffes were becoming fairly infrequent compared to last year (but still excessive when compared to previous years), and I was getting tired of scanning every stupid mistake. But in the last month I've seen an increase in Boo-Boos once again. Still, I tried to overlook the caption that identified two people in a photo that showed only one, the incoherent sentences with missing words, another confusing photo caption, etc. But today I decided to crank up the Boo-Boo Watch when the Monterey Herald printed the weather map for the San Francisco Bay Area instead of Monterey Bay. 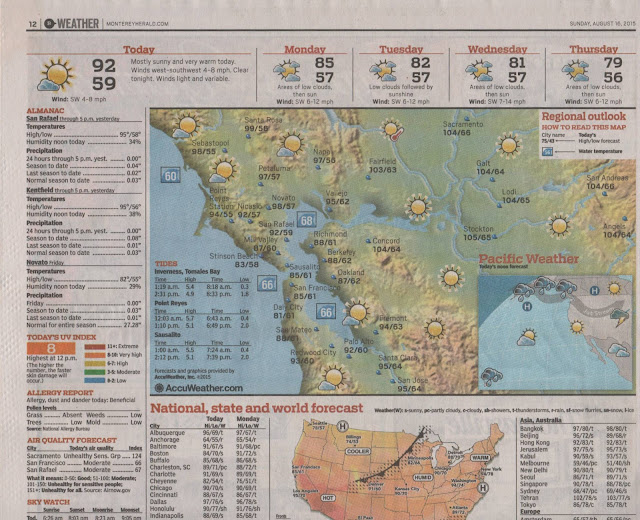 Last night I was was watching KYMB, the local MeTV outlet, when I saw a commercial for the Monterey Herald. It started out saying that it was time to start reading the newspaper again, and to encourage you to subscribe they offered a free trial. Sort of.

This isn't the first time the Herald has employed atrocious grammar to sell its own product. Early last October the Herald ran a print ad promoting a new advertising partnership with Google. In big letters it said "Are customers find YOU or your COMPETITOR?" It ran for almost a week and never was corrected.

The Herald has become its own worst enemy. After all, a newspaper depends on words to communicate the daily news. If they don't use them properly in their first point of contact with potential customers they aren't likely to attract the new subscribers they desperately need.
Posted at 4:01 PM No comments: